Colors As Our Guides: Turquoise 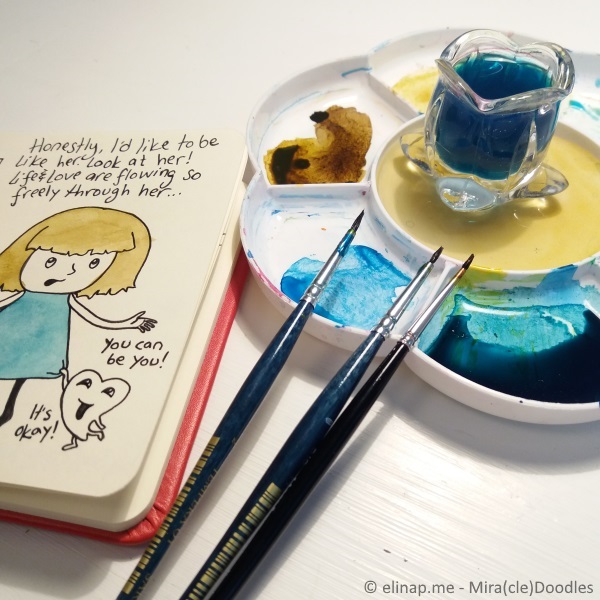 In 2018 I’ll explore daily doodling with different hues of ink on paper.
Turquoise colored the pages of my notebook in September.

For the month of September I intended to doodle about honest self-expression which is the color of the fifth chakra also known as throat chakra.

And so the story started to unfold… In came Mira with her turquoise hair and dress and what did she do – Invited her best friend Sandy over and so the story got a twist right in the beginning..

Sandy is a big hearted girl who loves all things beautiful, but very often she concentrates on supporting others rather than pursuing her own creativity. But lately she has noticed how lonely she gets when she makes herself small and hides on the background. She has started to feel deprived from what she sees other creatives who express themselves openly have. She has felt stuck and intimidated by creativity, because she really doesn’t know How to get where that little whisper she hears deep inside keeps nudging her. She has started to want to express herself more creatively and share with the world what she experiences. And give others the opportunity to connect with the beauty she sees in the world.

But her ego is now loud and makes her stand on her own way, complicating every creative endeavour she ever anticipates.

In the turquoise doodlestory Sandy goes through the stages of getting conscious of the bigger picture. At first she commits into walking her own path and stop comparing it to anyone else’s paths. We all have our own path in the end anyway.

Then secondly she needed to get clear on who is guiding her on her path. Her ego’s tricks start to unveil. It doesn’t matter if it is society or the Jones’ who you think are guiding you, when you let your fear misguide you from fulfilling your purpose and take your path on a detour – That’s truly your ego in the lead.

Next step for Sandy was a wakeup call of knowing that she does have a choice. You always do, no matter how masked that choice is.

She made a decision to become curious where this other option would guide her and her life started to feel lighter and lighter. Her heart takes the lead.

Highlights of My Turquoise Month

During the summer and my break from Facebook I had this idea popping up for an online space where we could see beautiful pictures and read small peaceful stories and messages from nature. I suggested it for some people and thought that there’s a need for a place like that. But in early September I realized that I could be the one to create it. It took me just two days to design and create a website for it and right away I got a couple of guest musings submitted when I went public with Minimal – This Is Enough website.

I think that is the Sandy side of me in action there in the spirit of expressing myself.

With turquoise representing honest self-expression I have been observing my behavior for this month on how honest I am in my expression. I have been a bit puzzled on how to express myself again on social media after my 99 days away from Facebook ended in early September. But after spending more time IRL lately I can proudly say that when I meet people face to face it is easy to be authentic and honest and still bring value into the world! Over the summer I have drawn clear boundaries in many ways on what “enough” means for me, and knowing it makes it so much easier to be honest in my self-expression.

Turquoise color represents throat chakra which is the fifth chakra. It has to do with how we express ourselves, our needs and wants and even our creativity.

It’s time to get clear on who are you in this world and what do you stand for? Claim your path and embrace it.

How Does Turquoise Work For You?

If you want to get clear on how you express yourself..

Add more turquoise in your life & let it help you open up for more honest self-expression!

I’d love to hear from you

Please comment below &
Tell us what “enough” means for you!

In October it’s time for another round of #Inktober! 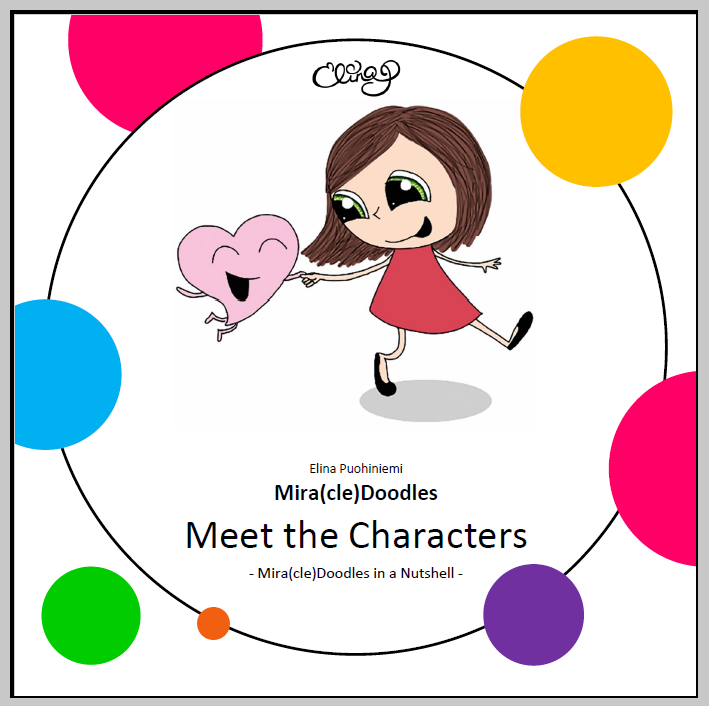 Learn all you need to know about Mira(cle)Doodles

Meet the Characters in this colorful little booklet & Stay tuned with my free monthly update!